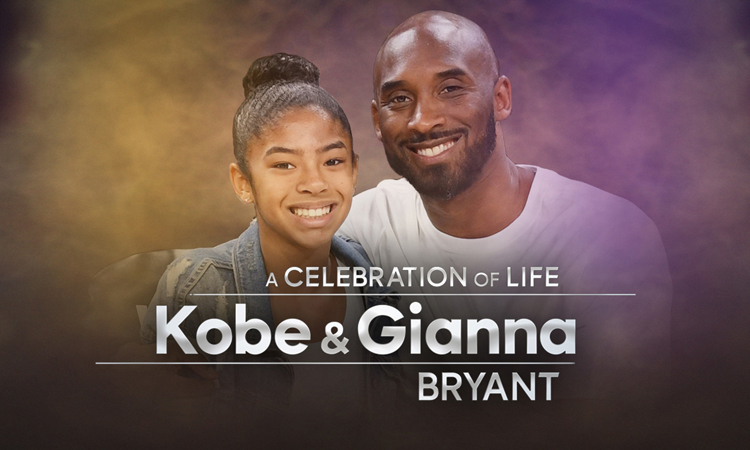 Celebrities and 20,000 mourners paid tribute to late Kobe Bryant during the memorial held at the Staples Center in Los Angeles on 24 February (Monday). The legendary basketball player died with seven other people (including his daughter Gianna) in a helicopter crash on 26 January 2020.

The ceremony opened with Beyonce who delivered a powerful performance of “XO,” which was one of Kobe’s favourite songs. Another powerful performance was given by Christina Aguilera who sang “Ave Maria.” Also in attendance: Michael Jordan, Dwayne Wade, Tim Duncan, Jennifer Lopez, Alex Rodriguez and Jimmy Kimmel.

The stage was also taken by Kobe’s wife, Vanessa, who spoke publicly for the first time after the crash. During her speech, she made some emotional remarks about Kobe and their daughter Gianna.

“I’ll never get to see my baby girl walk down the aisle, have a father-daughter dance with her daddy, dance on the dance floor with me or have babies of her own. Gianna would have been an amazing mommy. She was very maternal ever since she was really little. Gigi would have most likely become the best player in the WNBA,” says Vanessa about her late daughter.

“I want my daughters to know and remember the amazing person, husband and father he was. The kind of man who wanted to teach the future generations to be better,” admits Vanessa about Kobe.

Vanessa and Kobe got married on 18 April 2001 in Dana Point, California. They had four daughters together. The youngest one was born in June 2019.

We Are So Sugary staff extends condolences to the Bryant family and their friends.