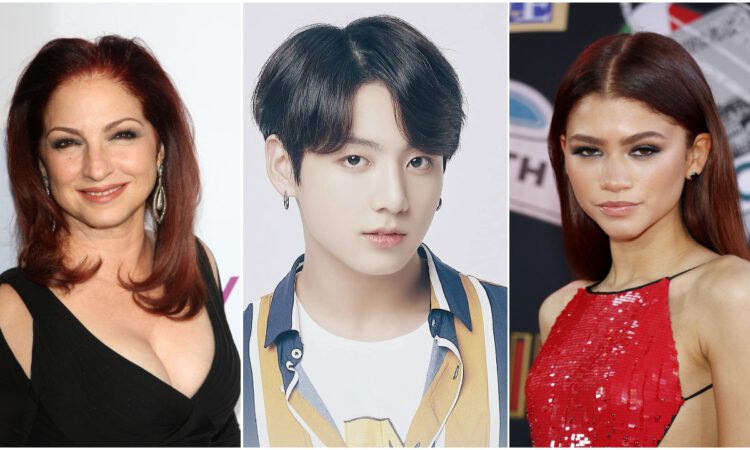 Zendaya is an American actress and singer. She rose to prominence with the role of Rocky Blue in the Disney television series “Shake It Up.” She also starred in such productions as “The Greatest Showman,” “Spider-Man: Homecoming,” “Spider-man: Far from Home,” “K.C. Undercover” and “Zapped.” She participated in the competition series “Dancing with the Stars,” which she finished as a runner-up. Zendaya also released one studio album called simply “Zendaya” in 2013, which achieved moderate commercial success. She is currently portraying Rue Bennett in the HBO television series “Euphoria.” Zendaya has several projects in the works – “Dune,” “A White Lie” and “Finest Kind.”

Jungkook (Jeon Jung-kook) is a singer from South Korea and a member of the popular boyband BTS. He released six studio albums with the band – three albums in Korean and three albums in Japanese. All of them achieve widespread recognition. The band’s latest album “Love Yourself: Tear” topped the US Billboard album charts in 2018. BTS is the best-selling artist in South Korea of all time. The band has sold more than 15 million albums so far.

Gloria Estefan is Cuban-American singer and actress. She started her career as a member of the group Miami Sound Machine and rose to international prominence with the song “Conga” in 1985. She released 10 studio albums with the band and 12 solo studio albums. The most recent one – “The Standards” – was released in 2013 and achieved significant commercial success. Gloria also starred in such cinematographic productions as “Music of the Heart,” “For Love or Country: The Arturo Sandoval Story” and “Glee.” She is also the recipient of three Grammy Awards and four Latin Grammy Awards. She received her star on the Hollywood Walk of Fame in 1983. Gloria has been married to musician Emilio Estefan since 1978.