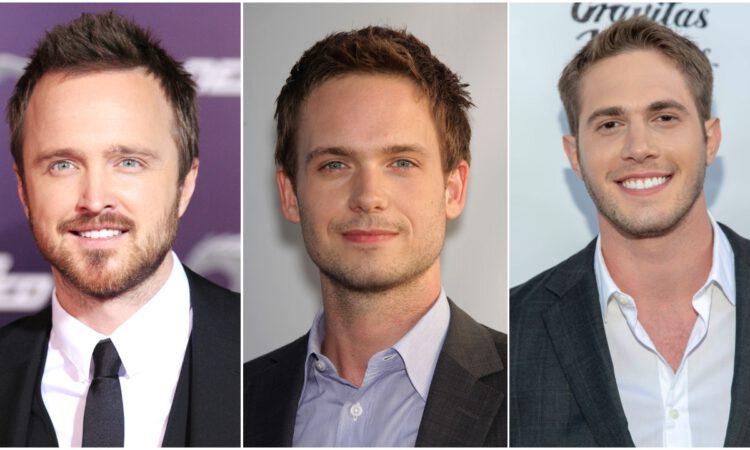 Aaron Paul is an American actor. He rose to prominence playing Jesse Pinkman in the television series “Breaking Bad,” which scored him one Primetime Emmy Award for the outstanding supporting actor. He also starred in such productions as “The Last House on the Left,” “Big Love,” “The Path” and “Exodus: Gods and Kings.” His newest project – “El Camino: A Breaking Bad Movie” – is scheduled to be released on 11 October 2019 on Netflix. Aaron has been married to Lauren Parsekian since 2013.

Patrick J. Adams is a Canadian actor. He rose to prominence portraying Mike Ross in the television series “Suits.” He also starred in such productions as “The Come Up,” “Room for Rent,” “Clara,” “Christmas in Boston” and “Rosemary’s Baby.” Patrick has been married to actress Troian Bellisario since 2016.

Blake Jenner is an American actor. He rose to fame portraying Ryder Lynn in the critically-acclaimed television series “Glee.” He also starred in such productions as “Everybody Wants Some,” “Supergirl,” “The Edge of Seventeen” and “American Animals.” Blake has been currently playing Sean in the television series “What/If.”

Kayla Ewell is an American actress. She is the best known as Caitlin Ramirez in the soap opera “The Bold and the Beautiful.” She also starred in such productions as “Freaks and Geeks,” “The Vampire Diaries,” “2 Years of Love,” “Sweet Sweet Summertime” and “A Friend’s Obsession.” Kayla has been married to Tanner Novlan since 2015.